A Tribute to Grandpa

A Tribute to Grandpa… 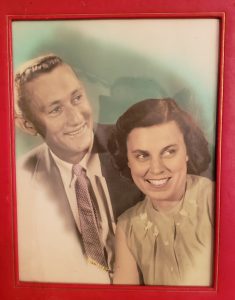 Most of you knew him as Joe Ballou but I called him Grandpa.

Grandpa would watch the sun come up in the McDonald’s parking lot or at Green River Bait Shop to have breakfast and talk with friends and fellow farmers.

Those who knew Grandpa knew that he was never at a loss for words. He was always willing to give his opinion. If people really wanted to get him going they could simply mention a couple of things.

There is a country song that comes to mind when I think of Grandpa…”You’ve gotta stand for something or you’ll fall for anything.”

Regardless of political affiliation, we can all appreciate the fact that Grandpa was solid on the ground in which he stood.

Grandpa also thrived in the field. Hay, corn, peppers, tobacco, and cattle. Farmwork was his happy place, but times were not always easy for farmers, so Grandpa became frugal and was a money saver.

I am sure Dad and Mark can attest to this by how many canned green beans they ate as children.

My brother, Darren, and I played basketball. Grandpa and Grandma never missed a game. If I were to walk into a gym now, I could visualize Grandma and Grandpa at the top of the bleachers sharing a bag of popcorn and one bottle of coke.

His frugality and thrift is something that I have come to admire over time because it provided his family security when farming income was unpredictable.

Lastly, Grandpa was of the dying breed that was ok with rolling up his sleeves and sweating for his family. As a young man, he was one of the first farmers around who had a hay baler and he took advantage of that market to provide for his family.

Morning and night he would walk the farm over counting his cattle to make sure they were accounted for. Most of us today ride an ATV to do that job.

Grandpa’s work ethic, frugal habits, and commitment to his beliefs are all great qualities I will take with me the rest of my life.

In closing, Grandpa’s mind and kidneys might have failed in his final days, but his love never failed for my grandmother. It is my hope that Grandpa and Grandma are now reunited and that they are sharing that one bag of popcorn and one bottle of coke in heaven. And I hope they are both happy with what they see.

How to Find Peace of Mind and Happiness

When Mom Leaves the House…