The Importance of Child Health Screenings

Today I come to you with a Family Friday post–a time in which Leah and I reflect back on all things about our family from the past and present. Today I write about something that sort of came as a shock to our family at the beginning of the school year. I share this to simply raise awareness about the importance of child health screenings and just capture the event by writing about it.

Leah and I are educators, and with Dori entering third grade, Holly starting preschool, and Kylea being in daycare, there are so many things to prepare to ensure that the start of another year is a success. It is never a sense of dread but more about excitement for what a new school year will hold, not only from an educator standpoint, but from our children’s point-of-view as well.

UGH!  Is all of this really necessary???

At least we were FINALLY at the final thing on the list, and we would be ready to tackle yet another school year.

Holly, our “little middle”,  waited quietly with Leah in the optometrist room to receive her eye screening. The first thing the nurse asked her to do was to cover her left eye and identify the pictures. Very quickly Holly zoomed through the pics, one by one, proud that she was able to identify each one.

This was just another formality. Soon all this will be behind us.

Then came the left eye. She started with the largest pic at the very top. Holly was nervous, hesitant, uncertain. She took a guess, but she got the picture wrong. As a parent, you want to help your child so much. You just want to blurt out sail boat. SAIL BOAT! 3D images were next.  After several more errors with identifying various images, the nurse told Leah that Holly had some vision problems, especially in her left eye.

The doctor came in and told us that Holly had 20/40 vision in her right eye and 20/200 in her left eye, which was deemed legally blind. As parents, several emotions came over us but mainly shock, sadness, and guilt. The doctors told us that she had Astigmatism in both eyes and that her left eye had Amblyopia (lazy eye).  The good news was that the doctors caught it at an early age, so it would be treatable and could become better over time by using modifications. We instantly realized the importance of child health screenings.

What was the course of action?

This was a lot of information to process at the beginning of a new school year, but we reassured each other that this was only a hiccup in life that we would get through and that one day her vision would be much improved.

How on earth could we miss this???

More than likely she had this condition from birth and over time she adapted to a point that it was difficult for us to detect. Sadly, it became the norm for Holly and she never complained. :'(  She has always loved life and we had no idea

Were there any subtle hints?

Now that we know her diagnosis, when we look back on past pics, her eyes looked somewhat strained. The pics below were before:

The picture below is a present picture of my little Holly after her first year of school/ PreK with her prescription. I see such a considerable difference with much less squinting.

Below is a picture of a notebook Leah bought Holly for her school supplies at the beginning of the year.  A few days ago Holly looked down at the front of the notebook with astonishment. We asked her what was wrong.

She said, “When I started school, the front of the notebook just looked white, but now I can see all of these colorful lights on it! 🙂

I share all of this with you to raise awareness about the importance of child health screenings. For more information on screenings that are offered CLICK HERE.  Screenings may seem like a hassle, and one may think that his kid could never be the one with deficiencies until the doctor is sitting down, breaking the news.  I am so thankful for the doctors who found this problem and that it will hopefully improve with time.

At her last appointment, her vision in her worst eye had improved to 20/40, and the doctor did not see any reason to increase her prescription at this point. Had this deficiency not been addressed, it would have undoubtedly affected her successful school year she had at Russell Springs Elementary School and Busy Bees Academy.

Below is such great improvement in writing her name from first of the year to the end of the year. She had awesome teachers this year and I am certain that better vision also helped in her learning process. 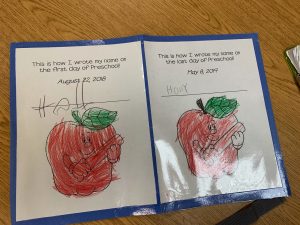 I am happy she can finally see the colorful lights on the front of her notebook. 🙂

Hold Tight to Your People